Our co-production with Belgian wunderkinds Ontroerend Goed is set to travel the world again. Watch this space for an announcement of exactly where its going soon.


TICKETS ON SALE TO FIGHT NIGHT – ADELAIDE AND SYDNEY


After a hugely successful European tour in 2013, tickets are now on sale for Fight Night in Australia. The show will have its Australian premiere during the Adelaide Festival in March followed by a three week run at Sydney Theatre Company’s Wharf 2 throughout April. Tickets on sale for Adelaide here and Sydney here.

Get in quick – 5 shows only in our home town!

The show will tour Belgium before returning to Europe later in the year to play Edinburgh and Plymouth. Look out for more news on its Australian season next year! More info and tour dates here. And if you speak Flemish, here


I, ANIMAL ON SALE NOW


Following the success of the Ruby Award winning  I Am Not An Animal  in Adelaide in March, TBP have been commissioned by Melbourne Zoo to create an interactive audio tour. Tickets for I, ANIMAL are already on sale with the official opening to the public on Friday 23rd November. Running every evening all year round, this cutting-edge experience is a ‘must’ for residents and visitors to Melbourne. Part multi-media tour, part theatrical experience, part animal encounter, the show has been designed for adults only. I, ANIMAL is a philosophical and emotional adventure in typical TBP style that will challenge your perception of the animal world and your own humanity. Next time you’re in Melbourne check it out! For more info click here


HAPPY 10th BIRTHDAY TO US!


TBP are thrilled to be celebrating 10 amazing years as a theatre company. We would like to extend our heartfelt thanks to all the friends, family, audiences, colleagues, donors, sponsors, funding bodies and anyone else who might have helped us along the way to becoming one of South Australia’s leading contemporary theatre companies. Although alcohol (outside of office hours of course!) and chocolate are always a hit in the TBP office, if you’d like a hand in helping us celebrate our next 10 years, then you can make a tax-deductable donation here. We can’t wait to share the next chapter with you all.


I AM NOT AN ANIMAL SEASON WRAPPED UP


After nearly 2 years in the making and having taken up temporary home at Adelaide Zoo for the past 3 months, the team at TBP have wrapped up an incredible season of I Am Not An Animal. As a closing production in the 2012 Adelaide Festival and the culmination of so much hard work with our newest friends at Adelaide Zoo, it has been an amazing experience that has taught the company so much about animal and human behaviour. For those who were a part of it, all those who worked with us to achieve it, and those who experienced it and left us such kind and heartfelt feedback – we are extremely grateful and privileged to have touched your lives in this way.


After an amazing 10 years as Artistic Director for The Border Project, Sam Haren has decided the time has come to leave the company and pursue further opportunities in the performing arts and convergent media. It is with much sadness we see Sam leave in September of this year but with heartfelt love, thanks and pride we wish him all the best in his future endeavours and know that as a founding member and dear friend he will always remain a part of our lives. However, it is with much excitement that we announce that from September a newly formed Artistic Directorate led by Cameron Goodall will take the company forwards into what we already know will be thrilling new ventures from 2013.

For more info check out our media release.

I AM NOT AN ANIMAL SOLD OUT!


We are thrilled to announce TBP’s latest offering I Am Not An Animal at Adelaide Zoo for the Adelaide Festival is officially sold out! Our thanks to all who have bought tickets to what will be a very unique experience and a glimpse of an Adelaide Zoo you’ve never seen before.


Having wrapped up Half-Real after a fab season in Melbourne TBP have moved on to our next big thing! I AM NOT AN ANIMAL is an exciting new collaboration between yours truly – TBP, the 2012 Adelaide Festival and
Adelaide Zoo. Launched recently as part of the amazing line up for the 2012 Adelaide Festival, I AM NOT AN ANIMAL is now on sale through BASS. Click here for more info about the show or book tickets by calling BASS on 131 246 or booking online


October 2011 – HALF-REAL MELBOURNE SEASON ALL BUT SOLD OUT!


Opening Friday 30th September until Saturday 15th October, the Melbourne season for Half-Real at The Malthouse for the Melbourne Festival is all but sold out! We’re thrilled with the response from Melbourne audiences and in general to the show. The venue have just released some last minute seats for the show and there’s even a waiting list for tickets for some performances so don’t give up – contact the box office on 03 9685 5111 if you thought you might have missed out. 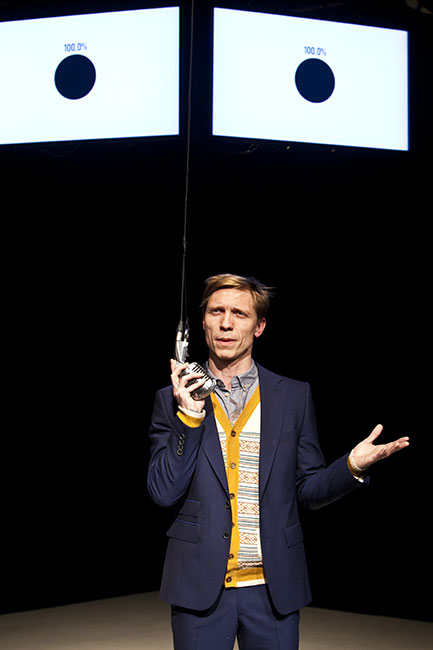