The Border Project is a contemporary performance ensemble committed to exploring the future language of live performance. We create performance that engages and communicates with an audience that traditional theatre has left behind, using a language that reflects the time and place that we live in. We build our shows around things that fascinate us, terrify us, confound us or crack us up. Like our audience, we participate in the sophisticated aesthetics of popular culture. We explore theatre as an intersection point for other popular forms, engaging with this to make theatre that genuinely speaks about the complexities of the world we live in.

In 2007 the company was one of three recipients of Arts SA’s triennial Theatre Development Strategy and in 2010 became a triennially funded Emerging Key Organisation of the Australia Council. This funding enabled the company to grow and continue to create new exciting and original works. To date we have formed partnerships with Adelaide Fringe Festival, Adelaide Festival Centre’s iNSPACE program, The Adelaide Festival, Melbourne Next Wave Festival, Country Arts SA’s Local Stages Initiative, The Malthouse and Melbourne Festival. We’ve worked with some amazing companies including Sydney Theatre Company and Windmill Theatre and we’ve collaborated with some truly innovative and talented individual artists including our current international partner, Belgian company Ontroerend Goed.

Into the future The Border Project will continue to strive to engage and challenge audiences with risky, playful theatre; developed by a company who are driven by a creative passion for exploring the uniqueness of a live theatrical event. 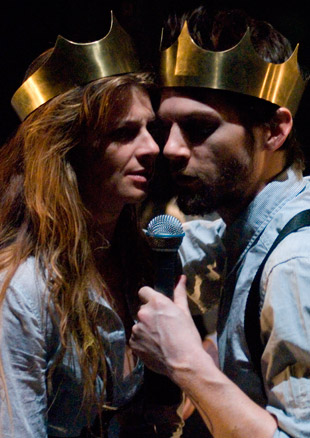 “The Border Project are from Adelaide and if you haven’t heard of them, pretend that you have because they’re getting talked about, in the good way”