The Border Project was founded in 2002 by a group of theatre artists including a director, six performers and two sound artists committed to creating unique theatrical works which capitalise on theatre’s liveness, and play with familiar popular forms to take an audience on an unexpected journey. We believe that the work that we are creating is genuinely unique and that it contributes to the diversity of contemporary theatre in both South Australia and nationally.

The Border Project’s early works presented in the Adelaide Fringe – such as Please Go Hop! (2004) and Highway Rock ‘n’ Disaster (2006) – gained the company both critical acclaim and an alternative audience including those who are not traditional theatre-goers.

In 2007, The Border Project was one of three South Australian companies to be funded triennially by Arts SA’s Theatre Development Strategy. This emerging triennial support enabled significant growth for the company. Trouble on Planet Earth (2008) was a box office and critical success for the company, winning five awards, including a Ruby Award and Adelaide Critics Circle Award for Innovation, the Bank SA Support Act Fringe Award, and the Advertiser Fringe Award. The critically acclaimed season of Highway Rock ‘n’ Roll Disaster at the Sydney Theatre Company (2008) expanded the company’s audience and national profile. At the end of this triennium in 2009, the company had significantly developed its management and producing skills, consolidated its membership and formed a range of new partnerships for its future work.

In 2010 the company presented Vs Macbeth, a major co-production with the Sydney Theatre Company, in a sold-out season in the Adelaide Festival of Arts, and built significant partnerships for its work in 2011. This included a co-commission from Windmill Theatre and the Come Out Festival to create Escape from Peligro Island, and partnering with Country Arts SA’s Local Stages Initiative, Malthouse Theatre and the Melbourne Festival to create and present Half-Real.

2012 has thus far seen the company undertake it’s first large scale outdoor work for The Adelaide Festival at Adelaide Zoo. I Am Not An Animal was a site-specific installation performance, experience by an intricate and intimate guided audio tour.

With many more innovations in the pipeline the next ‘border’ to be breached is international touring in 2013 with the company’s first international collaboration with Belgian company Ontroerend Goed entitled Fight Night, currently in creative development. 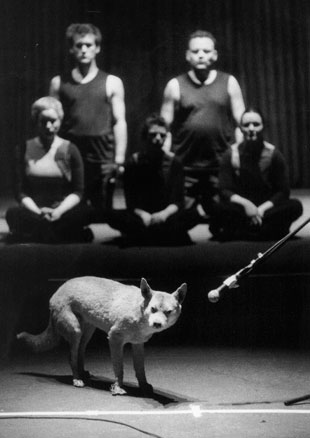