Cameron graduated from Flinders Drama Centre in 2000. He has worked extensively in theatre for Australia’s major companies. Awards include Adelaide Critics Circle Award for Individual Excellence, Advertiser Award for Best Actor, and Helpmann nominations for Best Actor (Hamlet) and Best Supporting Actor (The Goat or Who is Sylvia).

He was recently a member of Sydney Theatre Company’s permanent actors ensemble, The Residents (2009-2012). As a founding member of the Border Project he has co-devised, performed in or written music for all of their productions including I, Animal, I Am Not An Animal, Vs Macbeth, Escape from Peligro Island, Medea Material, Please Go Hop!, Highway Rock & Roll Disaster, Trouble on Planet Earth, and Disappearance.

He has written music for many other shows, worked as a reporter fro Behind The News (ABC), won an ARIA with his previous band The Audreys and once appeared in a really embarrassing Pizza ad. Cameron is a proud member of Actor’s Equity. 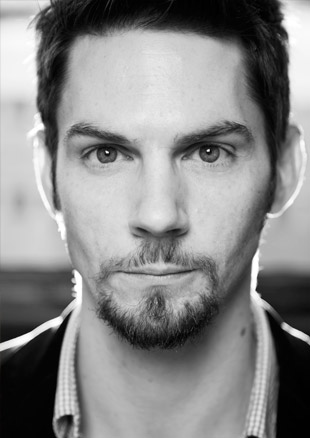