Humanity is defined by its desire to transcend its animal nature. Yet our animal instincts still govern much of human behaviour.

Following a sold out debut at the 2010 Adelaide Festival with Vs Macbeth, The Border Project returns with a once-in-a-lifetime collaboration with Adelaide Zoo.

I Am Not An Animal transforms the Adelaide Zoo into an extraordinary installation performance. For the first time, the animals of the Zoo themselves become the subjects in a work of art, engaging with built objects, environments and human co-performers.

Experienced via an intricate guided audio tour, I Am Not An Animal creates a unique, immersive performance for each audience member. The tour is carefully constructed to allow the audience to observe both the animals and the humans in this space – exploring the way we represent animals in popular culture, the depth of their importance in our mythology, to what fears they awaken in us.

I Am Not An Animal examines the conflicted way we see ourselves in relation to other animals and to our own animal instincts.

(Not recommended for children 15 yrs and under.) 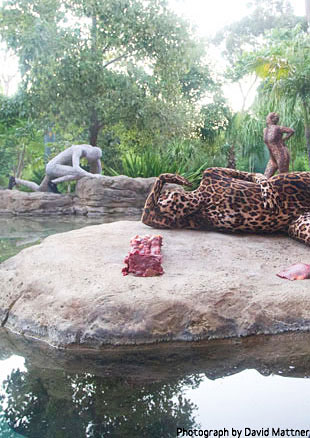