Despoiled Shore Medeamaterial Landscape with Argonauts shifts the story of Medea out of its classic Greek origins and propels it into the chaos of the early 21st century, in a dirty, low-tech suburban landscape.

Using an innovative theatrical style coupled with multilayered sound and video, The Border Project creates a fragmented portrait of Medea hallucinated by lone TV viewers hypnotised with the images channeled into their living rooms. By overlaying and colliding images from Film Noir, Soap Operas, Basketball and the Azaria Chamberlain case, Medeamaterial dissects this ancient story of betrayal, desire and revenge amongst feedback and flickering televisions.

Premiere season at The Queens Theatre in July 2002. 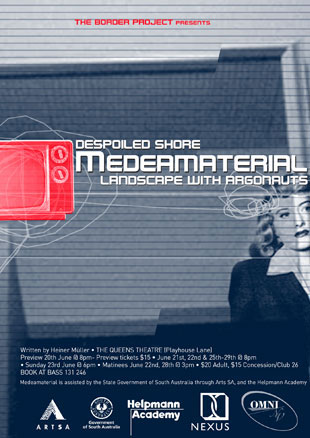 “…The final segment segued from the shadows of German expressionism and film noir to the decimated landscape of modern times. In the last scene, Jason, our damaged argo/astronaut, emerged from the void as television monitors flashed NASA film clips of the explosion of the Challenger space craft. All this, from Greek tragedy to 20th century eco-disaster, in 45 minutes.”
-Kay Schaffer, RealTime Magazine